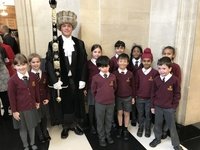 Bristol was among many cities, towns and villages in the UK raising the Commonwealth Flag today as part of Commonwealth Day.

A small group of Year 3 children attended the short ceremony which took place on College Green this morning. Along with children from CPS & BCCS the event was also attended by Bristol's Lord Mayor, Cleo Lake, the Lord-Lieutenant, Peaches Golding, who read out a message from the Queen as well as many other figures from across Bristol.

The children were especially interested in The Bearer of the Sword who wore a fur hat, large black coat and carried a 600 year old sword!